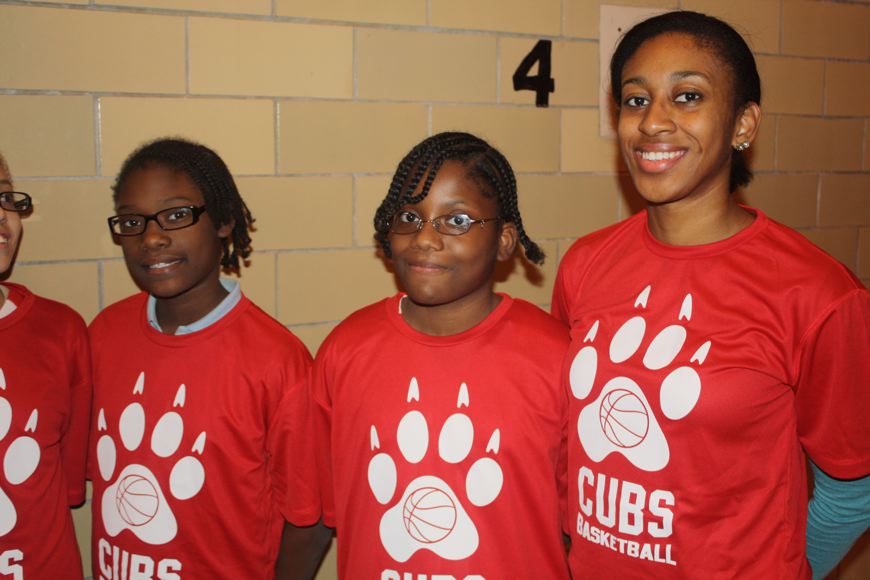 “We want to do more than rent your gym,” I told the public school principal. “We want to include your kids in our league.”

I explained to the principal that several studies show that if you don’t succeed in getting girls involved in sports and fitness before they hit puberty, there is only one in 10 chance that they will participate later in life.

Knowing most of the minority girls at PS 191 were either not encouraged or given access to regular sports and fitness, I decided to present the opportunity to see how many girls grades 4-5 were interested.

Twenty-two girls showed up for the first workout.

The only problem is that each week I was struggling to keep up with all the demands on my time. We had also just renovated the gym with six new backboards and we needed money to buy team uniforms and pay league fees – money I’d have to raise. Making matters tougher was that the girls were inexperienced, anxious and overwhelmed with the drills and rules. Many had a hard time listening, following instructions, and showing up regularly. Even with one flakey assistant helping me, the group shrunk to about 15 players and then down to 12 by the time the season started.

Within the same time period, I met New York Times writer and author Bill Rhoden. Bill was serving as the athletic director up at Intercession Church. Bill said he loved what I was doing with the Cubs, but with one catch.

“Don’t you think it would be more meaningful for the girls to be coached and inspired by someone who looks like them?” he asked.

“I’m not saying it doesn’t matter,” I said. “But for the record, one woman flaked even when I was paying her. And two, none of my coaches as a kid and even for most of my career looked like me. They were mostly men.”

“If you could make it happen, why wouldn’t you?” he said.

Long story short is that I listened and we lucked out. Arielle Robinson applied to be a coach at Mo’ Motion. Ari, a fitness pro, happily took the helm with the Cubs while coaching one of our grade 6 teams. Within weeks, the guidance counselor said that the behavior of the Cubs improved radically at school. They were having fewer disagreements in school. Homework was being handed in and of better quality. Grades and morale improved. The girls had been winning on the court simply due to their superior levels of aggression, and they were quite proud of it. The ball, the game, their team made them feel special when they walked into school each day.

The second season after the principal asked for us to help them field a middle school team, we assigned another terrific coach, Keris Timol. Two teams, hard-fought battles, and lots to talk about in school every day. Unfortunately Ari could not work the following year, so we had to team coach with Nayla, Malcolm and Keris working with the girls last season. I tell people all the time that a co-coaching situation is often far better than no coach at all.

The success of the Cubs spread beyond their circle. Cubs, Lady Prestigue and Mo’ Motion parents and fans filled the gym to root wildly (and with good humor) for girls who were diving for loose balls and sometimes running smack into each other without apology (see the one-minute highlight reel).

We gave the Cubs a break by allowing them the opportunity to compete, and in return, they made us stronger competitors. The Cubs now have elementary and middle school girls’ basketball teams, and Arielle Robinson is now our director of operations.

How can you serve a greater purpose in your community as a parent, coach, volunteer or fan?

#1 Recognize the opportunity to serve a greater purpose. We knew the stats on girls who didn’t play sports before puberty. We also knew cultural factors would be at play with girls from minority families with no sports history. We also knew that New York City hoops scene always leans toward the boys when it comes to gym space, coaches and opportunity. We stepped up as a program and league and said, “We are going to make our best effort to provide equal opportunity and equal access.”

#2 Get in or near the huddle. Get on the front line as a coach, co-coach, ref, scorekeeper, team parent, assistant coach or run the bake sale. Find a friend to help so that if you can’t make it, you’re covered. You will love losing yourself in the game, the kids, the cause.

#3 Contribute any way you can. If you can’t be hands-on, if you have no time or too many kids’ schedules, find another way to contribute. If it’s by donating or delegating, if it’s by recommending a coach, a volunteer, a corporate sponsor, a scorekeeper, do it.

One of the greatest moment of my career at Mo’ Motion and Gothambasketball.org – if not the greatest – was walking in the packed gym last March and seeing all girls teams throwing down. They were shrieking, laughing, scrambling, diving and loving every second of it. The fans, parents, coaches were all in with complete attention and huge smiles. What I marveled at is that all of this goodness happened without me on the front line. I listened to some sound advice and put the right people and role models in a beautiful place for everyone to shine.

See the photo albums and short digital files below. We are collecting donations to support the Cubs and other girls teams in our gothambasketball.org league in need of financial support.