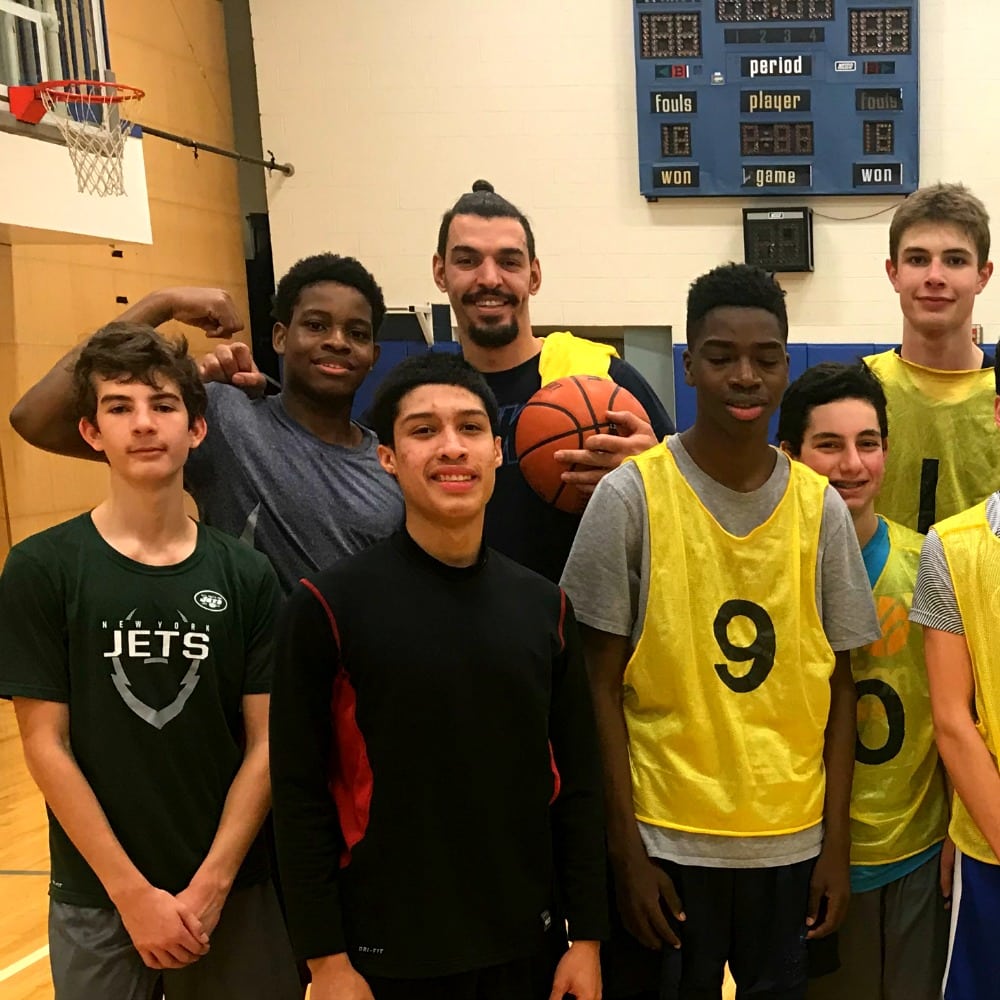 Note from Mo:  I met Zak three years ago when our head of coaching said, “We have a coach from Algeria who loves basketball and he’s trying to learn English.  Some of the kids may have a hard time understanding him, but he wants to get better, and I think he’ll be very good.”  I went in to meet Zak, and I understood him quite well.   Maybe it’s because I learned about his story as a karate champion from Algeria who loved gold-school hard work, which for Zak, required him to do his karate training on cement.   Zak also played basketball as a youth from high school, during college, and as a semi-pro player up until he badly injured his hand, which required surgery and ruined his chances of being recruited.  He pivoted in another direction after his hand healed, and he’s never looked back.  As a New York Open Karate Champion, who trained at his gym, not a dojo, while working two jobs, Zak is one of our best coaches when it comes to physical conditioning and agility.  Parents have said they love how much better he’s become at communicating, and his passion for teaching is everything they would want their child to see.  We are happy that Zak came to us to learn, grow and develop, which is something we hope for all of our coaches, staff and participants.

How long have you been working in sports programs?
I have done three months of an internship at a high school back in 2011, teaching (soccer, basketball, volleyball…), but technically I started here in NYC in October, 2014.

What do you love most about these experiences?
Honestly everything about them–even the stress I get from it! But mostly coaching basketball in NYC was something I had never thought of doing in my life. I am living a dream basically.

What was the greatest moment of your career as an athlete?
Winning my first national title in karate and playing the Algerian Cup Semi Finals in basketball – the closest I got to the trophy. I started practicing karate at the age of 6 or 7, back in Algeria, Africa in a city called Batna. I do remember my first dojo with green carpet covering the whole floor, as having a Tatami (mats on the floor ) was too expensive, so we basically practiced barefoot on a cement floor covered with 1 cm moquette. I remember every single fall I took on that floor , it hurt more then the hit that caused me to fall; the building was old, the ceiling leaked every time it rained, we had no heat, and it was so cold in the winter to the point I could not feel my toes.

I still don’t know why I kept practicing karate, but my only answer is the teacher – he was amazing. He taught us, cared for us, and helped raise us. I started participating in championships by the age of 10 or 11. I started with Kata, performing a choreography of combined moves, and the best performance wins. A year later I competed in fighting and I crashed on the first combat. We practiced hard. I remember having karate at least 4 times a week. Winning my first title got me hungry for more and that meant more training, and karate became a lifestyle.

What other fun things do you like to do in your free time?
In my free time I play sports, mainly soccer, surf, and basketball. I also like to read and get to know people from different nationalities and different backgrounds.

Who influenced you the most in your athletics, and in what ways?
My mom was an athlete and she always pushed me to do sports. Looking at her medals I always wanted my own. My karate sensei – I grew up in his dojo – was like my second dad (I spent more than 17 years with him). He made me believe I will be a champion one day and it did happen. My mom and sensei gave me the tools to become who I am today.

My dream was to play for my national team, and representing my country and club in international competitions, but this dream was crushed because of corruption and regionalism of the Algerian Federation. At 18 years old, I just started to realize how unjust it was – training all year long on cement (which I did for all my life), putting in all that hard work, and getting crashed because of the racism and corruption in Algeria.

During this time I had been playing basketball – it was my second love, actually. I had my karate teacher put a basketball rim inside our dojo. I would show up at least 30 minutes early just to shoot around and play basketball before karate practice started. I used to play on teams, and apparently I excelled my last year as a junior so the best basketball team in my city approached me with a (semipro) contract. It wasn’t a lot of money, but for an 18 year old kid and an agreement to let me still finish my studies, it was huge. At that time I stopped karate, my sensei (karate teacher) was sad but understood that I had to move on.

My other dream was to go study abroad and learn a new language. I saved for a few years all my basketball money and Mom helped me to come to the USA. My English wasn’t bad but I had to start with a language school. While I was studying the language I was working out and hitting the court almost every day. College tryouts approached and I had the worst injury of my life, almost losing my left hand. The worst thing was that all the money I had went for the surgery (it was either money or my hand), and once again I watched my dreams crash. No college, certainly no basketball. It took me almost a year to have my hand recovered at 90%. I was devastated, but I knew I had to get up and face life and take another road, but I wanted to keep it in sports so coaching was the one option I had.

Can you describe your first day at Mo’ Motion?
My first day at Mo’ Motion, I remember it was a Sunday morning at MS-44, I was called for a tryout and I was asked to do a drill for boxing out. I was stressed. It was my first time teaching something in English which is my 3rd/4th language and everything was new to me. It was quite a challenge.

If you were to describe Mo to someone, what would you say? (Don’t worry, she can take it!)
If I would describe Mo to someone, I’d say she is an accomplished woman – hard working and confident. I don’t know her very well but she seems like she’s done what she always wanted to do. She might go crazy on you from time to time 🙂 … but with all the stress she goes through to make things work, no one I know has every blamed her! She is definitely caring, and she makes herself available to help anyone.

What do you think is the most important skill an athlete can have?
The most important thing that an athlete should have is a positive, strong mindset. In any career, whichever sport you play or practice, there will be bumps and obstacles to overcome. I have never heard of a great athlete who got it easy. After all, for what someone could face, he has to have a strong will to come to practice and work harder than ever. I am not a big believer in talent. Yes! Talent exists, but is everyone who plays in the NBA talented? No! If you are athletic enough with a good mindset I believe you can make it.

October of 2017, 8 years after hanging up my fight gears, I found an add online for a NY OPEN Karaté (a competition I heard of when I was back in Algeria). I was so nostalgic just looking at those pictures and watching the karate videos, so I applied and they accepted me. I only wanted one fight just to have those feelings back. I started working out by myself, just going to the gym, trying to work on my stamina, and getting strong. Since I didn’t have a dojo or anybody to practice fighting, I was just using my techniques and trying to pretend I was fighting. My goal was, don’t get knocked out, stay up and finish the whole fight.
I went out there – a competition full of karate champions from around the world. It was just like an international competition I dreamed of as a kid. I had a fight and won – I couldn’t even believe that I won against a champion, but I guess all the hard work I’ve done through the years came in handy. My body was just moving naturally. I went all the way to the finals. By that time I was out of stamina and couldn’t move my feet. I unfortunately lost the final – had a silver medal – but for me it was the greatest title I had, after all I’ve went through. I am proud, and I don’t think I am done yet.